The main development idea around pgwatch2 was to do the minimal work needed and not to reinvent the wheel - meaning that pgwatch2 is mostly just about gluing together already some proven pieces of software for metrics storage and using Grafana for dashboarding. So here a listing of components that can be used to build up a monitoring setup around the pgwatch2 metrics collector. Note that most components are not mandatory and for tasks like metrics storage there are many components to choose from.

The metrics collector, written in Go, is the only mandatory and most critical component of the whole solution. The main task of the pgwatch2 collector / daemon is pretty simple - reading the configuration and metric defintions, fetching the metrics from the configured databases using the configured connection info and finally storing the metrics to some other database, or just exposing them over a port for scraping in case of Prometheus mode.

The configuration says which databases, how often and with which metrics (SQL-s queries) are to be gathered. There are 3 options to store the configuration:

Many options here so that one can for example go for maximum storage effectiveness or pick something where they already know the query language:

The second homebrewn component of the pgwatch2 solution is an optional and relatively simple Web UI for administering details of the monitoring configuration like which databases should be monitored, with which metrics and intervals. Besides that there are some basic overview tables to analyze the gathered data and also possibilities to delete unneeded metric data (when removing a test host for example).

NB! Note that the Web UI can only be used if storing the configuration in the database (Postgres).

Standard pgwatch2 setup uses Grafana for analyzing the gathered metrics data in a visual, point-and-click way. For that a rich set of predefined dashboards for Postgres and InfluxDB data sources is provided, that should cover the needs of most users - advanced users would mostly always want to customize some aspects though, so it’s not meant as a one-size-fits-all solution. Also as metrics are stored in a DB, they can be visualized or processed in any other way.

Component diagram of a typical setup: 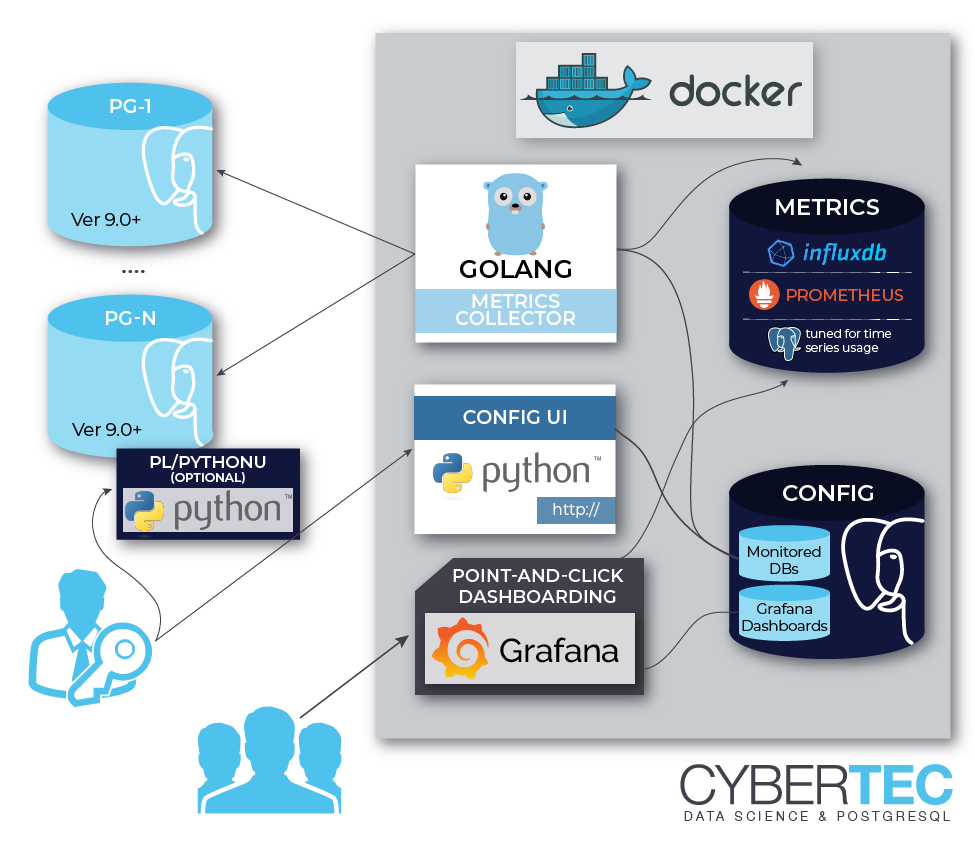